Thank you to Huffington Post for publishing my story about Sienna getting pressured about her body and marriage on Halloween when kids should just be having fun dressing up and getting candy!

And on the heels of that, please check out this terrific post from Mike Reynolds of Puzzling Posts who also talks about body image issues, both male and female.

October 31, 2014. Halloween. Sienna dressed as Snow White. Yellow skirt. Blue top. Red bow in her hair. A plastic jack o’lantern in her hand waiting to be filled with candy. She’s 2 1/2 years old. She still doesn’t quite get the trick or treating concept. But that’s ok. Mommy and Daddy are proud. So proud. Mommy missed trick or treating last year and she’s super excited. And then we knock on the door. The man opens. He’s 50-ish. Salt and pepper hair. Taller than me. He hands Sienna 3 mini Reeses Peanut Butter Cups. And then he says it:

“Don’t eat all of that tonight or you’re gonna get sick and fat and you’ll never get married.”

Excuse me? Seriously, excuse me???

My wife and eye exchange a glance of anger, surprise. I grit my teeth through a smile.

My head swirls. My daughter, my little Snow White just experienced the first crush of societal pressure heaped on girls and women about body image and marriage. I’m just so thankful she didn’t have a clue as to the negative and destructive power behind this man’s words.

But I did. My wife did. And I wanted to throw this man against the wall and scream at him:

“How dare you???” YOU are what’s wrong with this world! YOU are the cause of eating disorders and depression, of mental illness and suicide!! YOU and people like you!! Do you work in advertising, perhaps? Film? Television?? Do you enjoy spreading this propaganda?? This societal sickness that steals female empowerment, wrecks self-esteem and replaces them with a desperate need to compare themselves bodily and matrimonially, to starve themselves to death, to sit in therapists’ offices bemoaning that they’re 30 and not yet married. WHAT THE EFF IS WRONG WITH YOU??? Here’s an idea…read something about female body image disorders. Jean-paul Sarte wrote that ‘words are loaded pistols’ and you just pointed one right at my beautiful little girl. HOW DARE YOU???”

Instead I made a joke and my wife laughed, but as we left his door for the next, anger bubbled in us and the joyful playfulness of Halloween felt tainted. Our innocent Snow White just experienced the evils of the world even if she didn’t realize it. 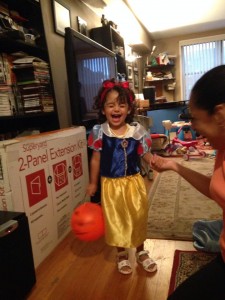 Sienna’s still too young to feel the backhanded sting of slings and arrows, still too young to study herself in the mirror, tearing herself to shreds because her 12-year-old waist is thicker than Mary’s or her belly’s too flabby so she needs to diet, diet, diet. Or she’s 28 and crying that no one will marry her because she’s too ugly, too fat despite her being positively gorgeous. Right now it’s just “green day” at school and she needs to wear a green shirt and bring in a green toy. Right now the world is an abundance of wonders.

“I want to touch the moon! I’m taking my flying carpet to China! Leaves are falling! Leaves are turning yellow!” 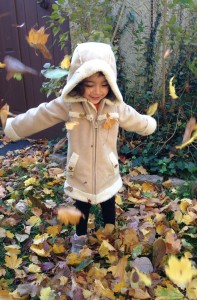 And that’s what it should be. That’s what it should be for everyone. This society has a deep-rooted, systemic sickness, a hatred towards girls and women with even an inch of extra meat on their bones, a brutal “tsk-tsk” for unmarried women. Society, thanks to unrealistic portrayals on magazine covers, in commercials, print ads, media of all forms, causes females to turn on and rip each other and themselves apart rather than band together as the beautiful people they are, and it causes men to objectify them. Sienna’s gonna face it. There’s nothing I can do to stop it except educate her as best I can, but what is one voice against the relentless, insidiousness media, the never necessary taunts in school, the comparisons, the scale, the mirror. How much can I do?

That’s why we need sites like A Mighty Girl. That’s why we need female superheroes. That’s why we need podcasts such as this one by City Dads Group in which Jeff Bogle of Out With The Kids and Mike Reynolds of Puzzling Posts discuss “the uphill climb our daughters still face in the 21st century and the role that we as dads can play in challenging the long-held beliefs and stereotypes that are foisted upon women and girls.” That’s why we need people like Christopher Persley’s column, Advice for my Daughter in which successful women provide advice for his 3-yr-old girl as well as the world at large.

Please check out this terrific article for which I was interviewed by Alice Gomstyn, contributor to Babble, ABCNews.com, and Babyzone, etc., that explores the correlation between societal parental pressures (such as seeing all those “perfect” pictures on Pintrest) and mental illnesses such as depression and anxiety. I’m always playing the comparison game and things like Pintrest & Facebook, all of the social media on which people post pics of the various activities they’re doing w/ their kids and meals they’ve cooked too often have me feeling like I’m failing my daughter. And I’m not the only one. Also interviewed were Katherine Stone, founder of Postpartum Progress, and Jennifer Marshall, the woman behind Bi-Polar Mom Life. I’m honored to be included.

You can find the article here.