I watched The Fault in Our Stars last night and then couldn’t fall asleep until the morning’s wee hours. Not because the movie got to me. I’m always able to distance myself from film, television and literature and found, well, faults in the cinematic adaptation of John Green’s terrific novel. While the movie opens with a voiceover of Hazel Grace Lancaster (Shailene Woodley in yet another wonderful performance) telling us cancer is real and unpolished, not like what we see in theaters, the movie ironically lacks that authenticity and instead feels glossy and melodramatic despite great acting. I blame the score and part of the script, but I digress.

Yet my mind spun all night. I’m not a hypochondriac, but I’m the type of person who feels an ache and immediately thinks cancer, like I’m just waiting for that bombshell. I tried to imagine what it would be like to be a parent of a dying child, but I couldn’t. I’m unable to do hypotheticals. I’m unable to invent feelings. I feel what I feel when I feel it even if it’s irrational or circumspect or all out wrong. It’s something my therapist and I argue about on a consistent basis. She asks me to imagine being happy, but I don’t know how to do that. So I couldn’t conjure up what a parent of a child with cancer might endure just as I’m unable to picture myself losing an arm in a shark attack. But I could put words to it: devastation, heartbreak, fear, loss, agony, self-pity, rage.

And that made me think of Oren Miller, the founder of the Facebook Dad Bloggers site, the man known as a Blogger and a Father, and the person who by welcoming me into the group as a writer and friend somehow changed the course of my life. Oren went into the hospital for back pain, what he thought was a muscle strain. It’s something we all experience at one time or another. Some weird pain that won’t go away. Some don’t worry. Others like me automatically think cancer! I don’t know what Oren thought when he went to the hospital for his mysterious pain, but I’m sure he didn’t envision a diagnosis of stage 4 lung cancer and a prognosis of maybe a year left to be with his wife and two kids and friends and pets and trees and beauty and sadness and the world that he’s known all his life. How can you predict that even if you’re like me and expect the worst?

In what can only be described as gorgeous, Oren laid bare his soul about the horrors he’s facing, the positive attitude he’s taking (or trying to take), the epiphany he had 4 years prior about being so worried and annoyed and uncomfortable that he didn’t realize he was having the time of his life. Read his words. Are they beautiful? Heart-wrenching? There’s no doubt they are and the dad blogger community came out in droves to support him. Brent Almond of Designer Daddy started a fundraiser with the meager goal of raising $5,000 which was blown away in a matter of hours. Weeks later more than $30,000 is there for the Millers and a new goal of $35,000 has been set. I have no doubt it will be surpassed. More than 40 dads blogged about Oren, his leadership, his friendship, his fight. I did so myself. John Kinnear of Ask Your Dad Blog wrote about Oren and the fundraiser for Lifetime Moms. Carter Gaddis of Dadscribe covered us dads rallying around Oren for Today.com. Even the Chicago Tribune profiled our rally and Oren’s fight. Men left and right shed tears as words poured from our hearts onto the screen.

I can’t imagine what Oren’s going through. What is it like to be 40ish, have a beautiful wife, 2 amazing children, a dream house and be told that cancer’s eating you alive so quickly that you might have one year left on this planet? Is there something wrong with me that I’m unable to feel what my good friend Oren is feeling? Does it mean I can’t empathize?

This is what kept me up last night. I lay in bed in darkness, at times feeling Elaine’s body heat when she rolled close to me or I close to her, trying to imagine those words: “You have a year to live.” Trying to imagine the ravaging mental and physical pain. Trying to feel. How would I react if got such news? Would I shatter like stained glass dropped from a rooftop? Would I put on a brave face and walk into battle, head held high. Would I sit alone in a room, shunning my loved ones as my father’s late friend did when he learned he had cancer? I don’t have a clue. I don’t have answers. And I feel like an awful person because of it.

I love Oren. I’ve met him once in person, but I love him because his friendship opened up a world of possibilities to me. And I’m scared for him, for his family, for myself. I want to run down to Baltimore and be with him. I want to cry, but no tears come because I can’t imagine what Oren’s life is now like.

I tossed and turned trying to envision myself hearing that Sienna might die from cancer, that I’m suddenly thrown into a world of chaos, machines, life support, chemo, pain, pain, excruciating pain. I can say the words, but I can’t feel them. Does it make me a bad person that I can’t answer the hypotheticals? That I can’t see beyond my own damn eyes? That my brain, my selfishly depressed mind, can’t see past my own irrationally fractured stars?

And that I can’t even imagine hypothetical happiness outside of empty words and phrases?

My therapist would say that I’ve only reinforced my negativity throughout this post with words like “can’t” but I’m not sure how else to ask these questions and demonstrate what I am, who I am…currently.

The Fault in Our Stars wanted to show cancer unblemished by Hollywood. The book succeeded, in my opinion. The movie failed.

And as much as I want to, I can’t visualize it or feel what it’s like.

What does that say about me? 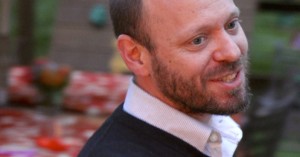 I started blogging about raising Sienna while battling depression and anxiety just over a year ago. In that time my relationships with my parents and sister have improved. My depression and anxiety have lessened somewhat, though they still make appearances. I’ve spoken in front of 200+ people at the 2014 Dad 2.0 Summit in New Orleans about my depression and received a shocking standing ovation. I’ve seen my work published on The Huffington Post, The Good Men Project, and WhatToExpect.com amongst others. I’ve even been published in a book: Dads Behaving Dadly: 67 Truths, Tears and Triumphs of Modern Fatherhood. And the fact is, none of this would have happened had Oren Miller aka A Blogger and a Father and the founder of the Facebook Dad Bloggers group, not graciously invited me in and urged me on.

It was a fight for me to put myself out there, but it’s nothing like the fight Oren’s facing right now as he was recently diagnosed with stage 4 lung cancer. So us dad bloggers have rallied around one of our leaders, one of our own. One dad blogger set up a fundraising site on GiveForward with the goal of raising $5,000. Within days it has surpassed $20,000. But $20,000 can only go so far towards medical bills and taking care of Oren and his family. We need more. I’ve given as much as I can and I hope others will be willing to do the same.

Too many of us, including myself, are bystanders when it comes to things like this. We see fundraising pages and we click on by…until we’re suddenly in the position of NEEDING a fundraising page. I won’t do that with Oren because magic happens when you stop being a bystander. If I give, as I did, and then I write this post which causes someone else to give and/or share the post, we could create a snowball effect and the amount we can raise for Oren or someone else in a similar situation can snowball.