I lay in bed, phone in hand, reading about Robin Williams’ severe depression, how the disease beat him down to the point where he found suicide the only option. It didn’t surprise me. I’d known Williams’ suffered from the same condition I’ve battled for 3 decades. He’d been in and out of rehab for drugs and alcohol. He’d spoken previously about the darkness that swarmed his brain just as his breakneck wit overwhelmed the world with laughter, though he never revealed its true depth. 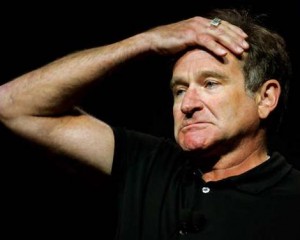 The great Robin Williams lost his battle with depression on August 11, 2014.

I’ve been there, though not as close…not nearly as close. I’ve imagined the bottle of pills in my hand. I’ve pictured the heft of the gun, the barrel cold against my temple. I’ve felt the fictional sweet kiss of the razor slicing my wrists. But I’ve never done anything about it. Even at my most fatalistic, pre-Elaine, pre-Sienna, I couldn’t put thoughts to action. Too frightened. Too scared of judgment. Post wife and daughter, the thoughts still appear randomly like fleeting wisps in the night. They’ve been there this past week and a half as I’ve suffered through a deep depressive episode triggered by something I’ve yet to figure out. My therapist and I are working on it, trying to pull me out of this feeling that I’m in the blackest ocean abyss, chains constricting my legs like an anaconda, arms flailing upwards against the crushing weight of the sea and the heaviness in my legs. I’ve had days this past week+ when I didn’t want to get out of bed despite my 2-year-old daughter needing her daddy. Sometimes my mom would come and take Sienna for a few hours so I could sleep (my usual means of recovery). Elaine took care of Sienna one evening last week so I could go see Boyhood, a movie filmed over 12 years about a boy and his family as they grow. The movie just exacerbated my mood as I felt time slip away. Just as the finale of Six Feet Under destroyed me with a montage of each character’s lives and deaths go by quicker and quicker making me lose my tentative grasp on time and causing a tearful breakdown in the car in my wife’s presence, so too did Boyhood, though this time from a parent’s perspective. As I watched Mason (Ellar Coltrane) literally age from 6 to 18 in the span of 2 hours and 40 minutes, I again lost that elusive and impossible grip on time, feeling Sienna grow faster and faster and faster. She’s still not yet 2 and a half, but I saw her graduate high school and I heard Mason’s mom’s (Patricia Arquette’s) heartsick words echoing through my head: “I got my degree. I got a good job.I put you through college. What’s next? My funeral?” (paraphrased). I’m almost never affected by film or television or literature, but I was by Boyhood. Knowing the state I was in, I should have gone to see Guardians of the Galaxy. I’ve had panic attacks this past week+ because I haven’t blogged in so long and I’m afraid readers and fellow dad bloggers will abandon me. For some reason I’ve been unable to even scroll through Facebook as if touching the keys would burn my fingertips and seeing the happiness of others will blind me. I’m terrified that if I don’t share other people’s blogs, if I don’t comment, if don’t hit the “like” button, they’ll all leave me. So I’ve shared some things without reading them. I’ve hit “like” a few times. I’ve made a comment or two. I’ve even posted about this, my most recent fight with this damn disease, and caring people have responded, some have send PMs, but I’ve been unable to read them. I post and run. Post and run. I can’t scroll long. It hurts too much. And I don’t know why.

This isn’t my first battle as I’ve said. I was unofficially diagnosed at age 9, 31 years ago. I kept everything inside until 1996 when I had my first nervous breakdown and then went back to bottling it up until my second nervous breakdown in 2010. I’ve been on so many different medications I’ve lost count. I’ve seen 4 different therapists and 4 different psychiatrists with my most recent ones being the best. I can be fine for months and then something can trigger an episode, something seemingly innocuous that leads to irrational thought after irrational thought until my brain might as well be a Sharknado, turning and twisting and biting. Each waking second I feel like I’m up against a Mt. Everest of negativity, 31 years of incongruous thought processes and feelings – wrong thoughts and feelings as my therapist will be quick to point out.

Depression is a fiercely selfish disease. When you’re deep inside its clutches, you can’t see how you’re affecting others. My sister taught me that years ago when she lectured how the world walks on eggshells around me, how no one knows what will set me off. I keep that in mind as best as I can but I still succumb at times. I’m better than I was 18 years ago, 10 years ago, 4 years ago. My episodes don’t last as long. Suicidal ideation is rare and cursory. But the triggers, those bastards, still exist and often I don’t see them coming and need time to work through them. And that’s what I do. I work. Hard. Each and every day. And I’ll never commit suicide. I have a responsibility to those I love. I can’t ever hurt Elaine and Sienna like that.

Robin Williams’ decision to end his life wasn’t fair to his wife or his children, family, friends. But was it wrong? I can’t say that it was. He was tortured. Another tortured genius like Hemingway and Woolf who could no longer battle his demons. Depression, like most mental illnesses is a cancer of the mind. If the pain gets too intense, who am I or who is anyone to tell a person to keep going if there’s no fight left, if each breath, each second is a waking nightmare. If someone has cancer, is in unending pain, sees no light at the tunnel and wants to end it, isn’t it just as selfish of us to ask him/her to keep living and fighting because we want them in OUR lives? I wouldn’t kill myself, but I can’t say Robin Williams is wrong for taking that road. Who knows how deep his depression went? Who knows what he thought in his last moments? This is a man who covered his sickness as best as he could, who made millions laugh as his own brain probably screamed he was a failure. We were robbed of so many more laughs created by Robin Williams, but not by Robin Williams himself. We were robbed by Depression.

I couldn’t sleep last night after reading about Robin Williams. I kept envisioning his last agonized moments. And then I’d wonder if his death would push me over the unable-to-blog hump and I’d chastise myself for it. Then I started thinking about all of the bloggers that would beat me to the punch and/or write with a more poetic touch. And I felt so egotistical. So disgusted with myself. At 3-something in the morning I posted on Facebook about my insomnia, Robin Williams, and my warped warped thoughts and fears. I’ve yet to read any responses, though my mother said I received a ton of support. If I can I write this then I can read those responses. I’m proud of myself for writing. I think. I hope.

If there’s any positive in this tragic loss it’s that Robin Williams was such a high profile figure, such a supposedly kind and humble man in person, such a dynamo on film and stage, that maybe the light will finally shine on mental illness. Maybe more information about mental illness will be available to the masses. Maybe the government and insurance companies will do more for those of us who suffer either aloud or in silence. Maybe they’ll do more to create affordable therapies and medication. Most importantly, maybe we’ll all talk about it more. People will look to Robin Williams and no longer be afraid to speak up. I’ve found that talking about my disease with fellow sufferers has been a huge form of therapy. They get me. And there are millions of us.

It’s time to stop being afraid if you suffer from depression or any mental illness for that matter. It’s time to stop fearing judgment. Step into the light and talk about it. If you’re feeling suicidal, call someone. Call a hotline. Seek help. Because we’re in this together. YOU ARE NOT ALONE.

As proven by the unfortunate loss of Robin Williams.

46 thoughts on “Depression is Not a Joke: Thoughts on Robin Williams’ Suicide From A Fellow Depressive”