When my daughter was first born I used to write these long posts on Facebook about what had happened each day or every few days, chronicling everything from a first smile to my anxieties as a new dad and all the little things in between that all new parents know and some non-parents don’t want to hear about. And like every new parent I plastered Facebook with pictures of my darling daughter so much so that some people probably started unfollowing me because they got tired of looking at her giving the same look just in a different onesie. The most important people in her life (besides my wife and I of course) – relatives, best friends, etc., couldn’t get enough, but the rest I’m sure had HAD enough and that’s where Tweekaboo would have come in perfectly, which I assume leaves you asking:

Tweeka-tweeka-boo, what are you? And why must all of parents run to open free accounts? 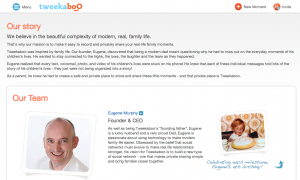 Well, simply put, Tweekaboo is a site founded by Eugene Murphy and designed for families; for the on-the-go moms and dads that don’t have time to put together giant scrapbooks (online or otherwise) of their pregnancies and children’s milestones and birthdays; for the parents who want to record and share funny anecdotes and cute photos or videos without smothering Facebook and without worrying their privacy might be compromised. Tweekaboo is, in essence, a brilliant online way to share “moments” online with a close knit group of people who can comment and share their own moments in turn. Just upload a pic, vid, note or diary entry via via Iphone, IPad, Mac, or PC (apps will soon be available for Android and Blackberry users as well) and it’s right there for all in the group to see. But here’s the key (and this is for parents of children of all ages): you can import things from Facebook and Twitter as well and when doing so Tweekaboo automatically imports all of your captions and notes pertaining to the pic as well as all of the comments associated with each picture! You can even export pictures, videos and diary entries directly to Facebook or Twitter if you so choose. What’s important is that you don’t feel forced to do so and instead feel compelled to just keep that group closed as if they’re part of a special club (which they are).

So how’s it work?

Simply go to the very easy-t0-use and clutter-free www.tweekaboo.com and sign up for a free account. Create your profile (note how it shows a list of possible albums at the bottom of the screen capture as this will come into play later): 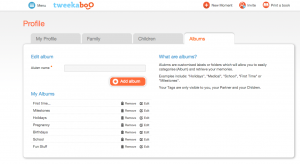 Then invite your partner  to join followed by friends and family members: 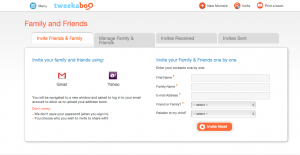 Once you’ve done that, it’s time to start creating “moments.” As stated before you can do so by uploading something off your home computer or phone (again, Android and Blackberry apps are on the way) or you can import selected pictures from Facebook both by following user-friendly prompts.

Once you’ve chosen your moments you can add captions and notes and sort them into the different standard or customizable albums (pregnancy, birthdays, holidays, one for each child, etc.) I mentioned earlier, though when you log into Tweekaboo you’ll notice all of your photos appear in a general mass from most to least recent. However, just click on the album you wish to see and it sorts automatically. That’s it! Now everyone invited can comment and share and will be notified via e-mail that someone has shared a Tweekaboo moment. So, for example, below is a Tweekaboo moment imported from my wife’s Facebook account complete with caption (don’t worry, the full caption’s there) and a comment: 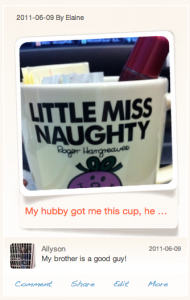 You can even edit moments you’ve imported from Facebook, choosing which comments you’d like to keep and which you’d like to trash or adding additional notes or missing captions.

And here’s where it’s about to get really cool. Recently Tweekaboo began offering a printing service that allows you to create a photo book filled with your pictures and words. When you start creating the “Tweekabook,” it automatically organizes moments from earliest to latest so you’re really looking at a timeline of the subject you’ve chosen. Should you include imported Facebook pictures, the book prints out all associated captions, notes and comments (except those you’ve chosen to delete) as well so it’s really like traveling down memory lane. I recently got the chance to create a book for my wife for Mother’s Day beginning with our daughter’s birth and going about 7-months in and it literally had her teary-eyed and smiling because though a picture’s worth a thousand words, all of that daily exposition I’d written and all of the comments people posted brought each moment right back to her heart. “That’s right!” she said as she read a comment, “I remember saying that! I remember doing that!”

Here is a lowdown on book pricing: 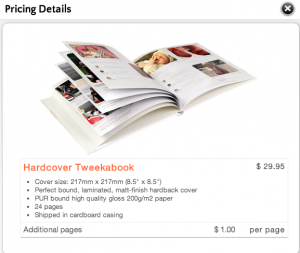 The quality of the book is superb. I brought it with me yesterday to my father’s 70th birthday celebration and showed it around and people were wowed by the incorporation of Facebook comments and notes. That, to me, is what will separate Tweekaboo from sites such as Shutterfly and Snapfish. That, to me, is what makes it worth purchasing a photo book from Tweekaboo which ships anywhere in the world.

Here is how the book looks in real life (please not that I took the picture in darkness and from far away to secure my own privacy): 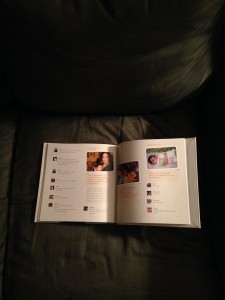 Now, while I’ve expounded on the greatness and innovation of Tweekaboo, the site is not without its bugs, especially when it comes to creating the book. Currently videos are limited to approximately 30 seconds, but the reality is just last year Tweekaboo was still in beta version, and Mr. Murphy assures me that the 30-sec limit will increase in the future. The book requires a minimum of 12 front-and-back pages and has a maximum of 24 back-and-front pages. You can only save one draft of any one book at one time, so if you’ve edited some stuff within the book and you realize you’ve forgotten to add a picture, you need to start over. It’s better to edit each moment before you start the book. Moreover, as stated before, when you log into Tweekaboo, all of your moments show up on the homepage rather than in tight separate albums. This can be rather frustrating if you need to see something at the bottom of the page because you have to scroll your way through

However, and this is where I am positive these and other issues I might have missed will be fixed in a timely fashion, I spent a great deal of time corresponding with Tweekaboo founder, Eugene Murphy, and CTO, Mark Hennesey, about these bugs and each time I caught something, they put it immediately into a queue of things to fix. For example, I suggested that photo manipulation was minimal and Mr. Murphy informed me that they’ve increased the speed to implement a new program which allows for photo cropping, enhancement, etc. Further, there are plans to make books longer than 24 pages front-and-back, but that is on the back burner at the moment. Obviously none of these improvements are solely because of me (I’m sure they were in the pipeline), but what I got from this was that those behind Tweekaboo are eager to create the best possible experience for the user and consumer. Some companies would balk if you wrote them, but Tweekaboo was completely flexible and willing to listen and consider ideas. Based on my interaction with Mr. Murphy and Mr. Hennessey, I have no doubt they would be like that with the average user as well and that customer service will be both a breeze and a pleasant experience.

Currently Tweekaboo is being marketed as a “parenting hack” meaning a quick online diary and easy-to-put-together and print book for parents with multiple kids who can’t put in the time and effort they did into documenting their second or third or fourth child as they did with their first or working parents who likewise lack that precious time. Parents can access it on-the-go or at home, but as the company grows (and it is sure to), those of us with older children will benefit from the longer book because the memories it will bring back will be that much more extreme (see my wife tearing up after reading comments she hasn’t seen for 2 years). Further, Tweekaboo doesn’t necessarily have to be limited to parents and their families. A group of friends can use Tweekaboo and get that same secret clubhouse security. For instance, a member of a group of friends all going off to college just might want to give each of his/her best buddies a trip down memory lane via an extraordinary Tweekabook filled with pictures, notes and comments.

Essentially Tweekaboo is for anyone, and that’s a really great thing because people are going to love it!

Grade: A- (A+ once the company fixes some known bugs)

Disclaimer: While I was not paid for this review, I did receive a free Tweekabook.

One thought on “Tweekaboo Review: A Terrific Baby/Book Diary for the Digital Age”