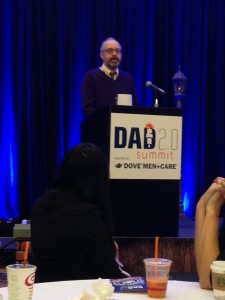 On March 31, 2014, I tried to write a recap of my experiences at the Dad 2.0 Summit. I’d already written about at the conference, about how reading my blog about having depression in front of 250 people challenged my defenses, but I had stories to tell, pictures to post, impressions of New Orleans to express. My second Dad 2.0 recap had been on my mind since arriving home back in February, and at the end of March I decided I’d procrastinated long enough.

All I wanted to do was post pictures, tell a funny anecdote or two, and write about my overall wonderment during the weekend. It didn’t need to be a linear narrative. It didn’t need to have a moral or underlying theme. But as I wrote I realized I was falling into the trap of feeling like I had to write everything from start to finish and as the minutes and then hours ticked by I became more and more anxious – heart racing, chest filling with granite, tremors infiltrating my fingers, mind simply out of control with hateful thoughts about myself. So I posted on the Dad Bloggers Facebook page:

“Am trying to blog. Am failing to blog. Too much pressure to blog. Trying to do a second recap of Dad 2.0 but can’t figure out how. I don’t think I can be as poetic as so many of you. I have lots of pics and some stories and impressions, but everything feels jumbled and forced. Writing feels jumbled and forced lately. I hate this! I hate feeling like I’m in competition with all of you wonderful writers! I hate that I do this to myself! I hate that this is where I go! I HATE IT!”

“I can’t take this. I’m no damn good. You guys are so prolific and so smart and so poetic and so genius and introspective and observant and it seems (SEEMS) that it comes so easy to you and I’m probably being irrational and I’m getting caught in that web I weave and I need help because I can’t breathe because I’ve sat here trying to write this stupid blog for 2 hours and it’s awful”

“no, it’s just me. I’m still recovering my an ear infection and Sienna’s still sick. I’m just so upset. I’ve thinking about this blog for 2 months. I got my pictures set up and I was all like, I’m just gonna throw out random observations and pics and thoughts and instead I’m getting bogged down in describing the conference from beginning to end. I tried to look at other people’s recaps and that got me on to the comparison game again. I recapped my experience speaking, but there was a bunch more I wanted to say. Maybe I should just forget it. I have like 5 ideas, but I’m getting so stressed because I keep comparing myself to all of the group members going viral and a bunch of people who write brilliant stuff almost every day and I can’t stop and I just hate myself so damn much! I can’t stop hating myself! Why do I hate myself so much?”

More and more responses from fellow dad bloggers but I could no longer read or absorb them. Aaron Gouveia of The Daddy Files IM’d me, asked for my phone number. I gave it and posted:

I can’t remember much of what was said. All I know is that Aaron, this person I met at Dad 2.0, this person with whom I felt I strong kinship, started talking me down, listened to my stuttering, my hysterics, and gave me positive reinforcement by telling me I was going to be okay and so many people care about me. I’m not going to lie. I thought of suicide during the phone call as Sienna sat in her pen, concerned, as protected from her crumbling father as I could make her.

How long did the call last? I don’t remember, but as I listened to Aaron talk about me possibly taking a break from blogging and that if I did it would be fine, that no one would judge me, I began to calm. My hysterics became sobs. My sobs became deep breaths. Despite his kids climbing all over him, trying to get his attention, he would not hang up until he knew I was alright and safe. I promised I wouldn’t do anything rash. I asked him to tell the others that I was okay, that I thanked them for their support, but I needed to take a step back from Facebook as I was drowning once again in social media and self-induced pressures. We hung up. I put Sienna down for a nap. I fell asleep on the couch and refused to open the computer until the following day.

I was still in a bad state when Elaine got home. She took care of Sienna and comforted me. I felt like I’d run a million miles, my body broken, my brain like mush. I went to sleep early making sure to take a melatonin.

I looked at the computer the next day and saw 6 IMs from dad bloggers. I saw a bunch of responses to my final post most of which expressed how I was failing no one, all of them showing worry and reminding me I had this virtual community of dads on which to lean. It took me days to respond to the IMs, but I posted this:

“Thanks everyone. I’m still not doing great, but I’m braving FB because Aaron told me you guys have been really supportive. I can’t bear to look at what I posted. I also can’t thank Aaron enough for calling me. Just embarrassed I was so hysterical on the phone. I plan to read all of and take a lot of your advice. I’m not sure when I’ll blog again. It might be tomorrow or next week or next month. I’m still so down right now and I’m so sorry I haven’t checked so I could share your stuff and comment on it and support all of YOU. Just know how much I appreciate it.”

More responses about how there was no need for me to feel embarrassed, but it took time for me to get it.

As I remained in my depressed state for days, I thought about my failed blog attempt. I began to really read what people wrote to me. I wrote back to those who IM’d me. And I realized the real lesson of Dad 2.0, although it took me a long time to blog about it because I’ve been so scared to write that my anxiety level’s been almost radioactive. It’s a lesson with which I concluded my first Dad 2.0 blog:

I found my tribe.

Dad 2.0 and the Dad Bloggers Facebook site are all about at-home and stay-at-home dads working together, being there for each other when we have difficulties, sharing advice and experiences, reminding each other that we’re not alone, inspiring each other. Some dads suffer depression and anxiety just like me and I’ve written to them about it when they’ve hit hard times. I said I’d be there for them to talk to because I understood. In turn, when I posted what I did, those same dads wrote to ME using similar words, reminding me that I’m not the only one who suffers panic attacks and depressive episodes, telling me they’re there for me should I need them. Further, bloggers I compare myself to (even though I shouldn’t) posted that they too suffer insecurities and often hate what they write. Again, I’m not alone.

That’s the real lesson of Dad 2.o. Even though people have different lives and are scattered across the country, it’s a community of which everyone reminded me I’m an important part despite my irrational fears that they’ll forget me.

I’m nowhere near mentally healthy…yet. My stability remains shaky for the moment, but hopefully it won’t always be. Regardless this realization about Dad 2.0 and the Dad Bloggers Facebook page is significant. What’s even more pertinent is that I got it out of my system. I blogged, I hit “publish” and I shared. I thank every person who IM’d me, posted, worried about my safety, told me I’m not alone. I can’t express how much it means to me. I especially thank Aaron Gouveia for going out of his way (he’ll refute this) to talk me down.

Now I’m off to see my therapist.