I was loving Utah’s 80 mph speed limit when our rear back tire blew and I mean BLEW, like a small explosion, our car suddenly lopsided and dragging. As I slowed down and pulled to the shoulder, we watched the full rubber ring roll by our window until it settled a ways away. We were 130+ miles away from Sandy, Utah, 130+ miles away from my friend, John Kinnear’s of Ask Your Dad Blog home, the place where most of our stuff remained. We had a flight the next morning. We wouldn’t be taking the Kinnears out for dinner tonight as thanks for letting us crash at their house as promised. Instead we sat at the side of the road, a bit stunned, but safe,  in the middle of nowhere, Utah.

As I talked with our rental car company and discussed our options (the closest rental car place stood closed 100 miles away, and driving back to Sandy on a donut was out of the question, especially since we’d have to go 40-50 mph) and Elaine used her phone to figure out nearby places we could stay, a Good Samaritan stopped and put on our donut. He refused the $20 bill we offered and instead said, “Pay it forward.”

We drove 15 miles to Fillmore, Utah, where we found ourselves at a Best Western hotel/restaurant. And there we waited 2 1/2 hours for a taxi to come get us and then drive another 1 1/2 to John’s house.

As we sat in the restaurant waiting and waiting and waiting, Elaine expressed her worry that like usual, I’d internalize this maddening experience and let it sour things, allow it to damper our vacation to Bryce Canyon and Zion National Park. And it was at this mention that I, a heavily depressed and anxious person with warped views, an insane ability to take everything personally and a man whose glass remained perpetually empty, not even half empty, but barren, realized I’d somehow…grown? I registered that my first thoughts upon pulling to the side of the road were:

At least it happened AFTER we’d visited Bryce and Zion

At least it happened while the sun still shone

That’s not me. That’s never me. I’m the one who curls into a ball of anxiety at the slightest inconvenience. I’m the one who rails against the gods for raining on my parade without even considering anyone else. I’m the one battling a selfish, narcissistic disease. I don’t look on the bright side. But I did. Somehow I did. And somehow it came naturally and I can’t explain why.

Maybe it’s because Elaine and I had already done a 3 1/2 hour horseback ride through Bryce Canyon, one in which the cowboys seated me incorrectly leading to so much pain that I felt my knee would be wrenched off, one that caused the tops of my hamstrings to scream at the slightest touch or movement later that evening, but one that blew my mind and I’d do again in a heartbeat. 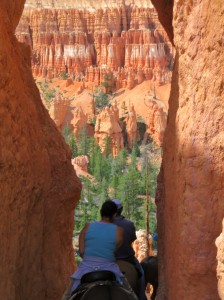 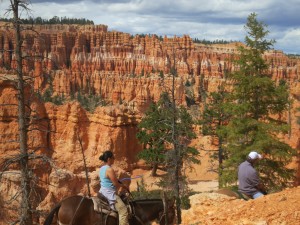 Maybe it’s because we’d already hiked through Zion, one a sharp and steep incline that led to Weeping Rock, a beautiful rock face that naturally dripped water, another a 2 mile stretch through the darkness during which I got to give my “city girl” wife (born and raised in the Bronx, NY) the stars. At one point she lay down on the path and marveled at all the celestial bodies she’d never seen, at their infinite number and splendor. Was it because during that night hike I moved my headlamp to the right unwittingly illuminating a tarantula (A REAL, WILD TARANTULA) that stood waiting for its venom-filled prey – a large, black, still-flailing beetle – to fall still so it could feast? Was it because I witnessed a large fox cross our path in the night, it’s eyes aglow from our headlamps? Was it because I’d already seen this: 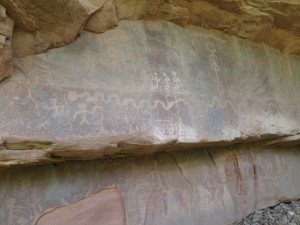 Was it because Elaine convinced me to drive back through Zion which padded our return trip by a couple of hours but allowed us to see these: 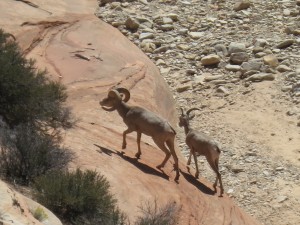 A desert long-horned ram and mate at Zion National Park 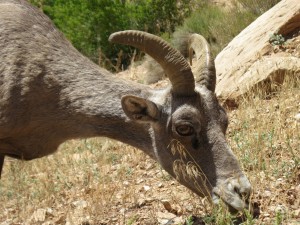 Was it witnessing and experiencing the majesty of nature I’d craved for so long that filled my glass? Was it sharing my love of these things with Elaine? Blowing her city-raised mind again and again?

Even when things went wrong during the trip, something seemed to go right. I wanted to give Elaine the stars at Bryce which has the darkest place in the continental U.S. I wanted to look through telescopes and see Jupiter and the Milky Way, but a rainstorm killed all of that. So we went to a local steakhouse, enjoyed a fine meal and a sinful Oreo cream pie despite the severe pain from our earlier horseback ride and then, there it was, right outside our window:

There was so much beauty on this trip. A picture everywhere you turned. It was exactly what I’d wished for. So how could I complain? How could I wail and moan after we’d been so lucky to see so much? My brain knew it…even the irrational part…and it naturally thought about the positives following the blowout instead of the negatives – possible costs, the hassle of the taxi, having to wait for hours. Normally I’d shake and quiver at having to arrange for service. I’d be lost. I’d let my wife take over. I’d call my parents. But instead I was so full of vigor from experiencing Bryce and Zion and so many amazing things that my depression and anxiety never reared their ugly heads.

None of this hit me until Elaine told me she was worried about my mental state and when she did I sat bewildered but strong. I talked to my therapist yesterday and she told me I now have a muscle to strengthen because I have proof that I can fill my glass. The water might evaporate over time if I let it and to be honest, I’ve been a bit sad since we returned. I’ve been afraid to look at Facebook. Would I be forgotten? Abandoned? I’ve been scared to write. But on the flip side I have all of these pictures and more so, I have life experience to conjure if I can. I lived through a blown tire in the middle of nowhere, Utah, and my reaction was one of humor, lightness and positivity, because nothing could take back what I’d already seen and done.

So is this the dawn of Lorne Jaffe, positive thinker? I don’t know. I might fall back into pits of depression as I return to the normality of life as a stay-at-home dad. I might suffer anxiety attacks over ridiculous things. My judgment might be clouded at times, my thoughts muddled, my self-loathing beastly.

What matters is that I fight through it all, that the dad blogger friends I’ve made around the world continue to support my battle, that my family and friends keep loving me, that I keep loving them, that I look at Sienna with wonder and joy. That I remember that just because this vacation is past, it doesn’t mean another one won’t be in my future. And I will fight. And I will remember. 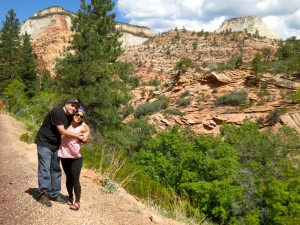 Elaine and I at Zion National Park