Her utter excitement and bewilderment swept through me like nothing I’d ever experienced, for as much as I’d like to say I’m seeing things anew this might have been the first time where I truly felt the power of watching the world through my daughter’s eyes. It was a crescent moon, the type of moon that in the immortal words of Cookie Monster, “looks like a cookie, but you can’t eat [it].” In my arms Sienna stared at the sky, eyes wide, mouth agape. She pointed.

Her rush of joy filled me. Sienna had been saying “moon” for some time now because she has a toy that lights up and spreads a starry sky across her bedroom ceiling. Elaine and I spent time in her darkened room save for the electric stars and crescent moon teaching her words. This was the first time I could remember her seeing the celestial body and calling its name.

The moon disappeared behind some fast-moving clouds. “Where’d it go?” Sienna asked, arms outstretched, palms up, questioning. I assured her it was still there. We waited until it reappeared. 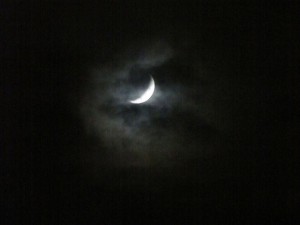 I felt so lucky to have witnessed something so wonderful, a parent watching a child’s recognition of Earth’s natural satellite, an occurrence that’s been going on since the beginning of human existence. In that moment I felt no fear. The heaviness of failure that I’d applied to myself because I am a stay-at-home dad was further than the moon from Earth. It was so special that it made me realize how quickly Sienna’s language skills are developing. How because I’m a stay-at-home dad I’m fortunate enough to enjoy childhood leaps and bounds that generations of men could never experience. I feel like I can see Sienna’s mind and personality flourish, the gears turning behind her eyes. I’m head over heels for my daughter, even if I need a break from her quite a bit.

My one regret is that Elaine wasn’t there to share the moment with me; my family was incomplete. Because she’s currently the breadwinner, she does miss out on certain things, and I know she’s devastated by that. But she’s an incredible mom and when she’s home with Sienna the love between them is palpable. When she’s home Sienna runs to her, so excited to see Mommy.

I never thought I’d have a girlfriend, let alone a wife and a daughter. My brain still fights me when it comes to having it all. My view of success remains warped. I still feel like I’m depriving Sienna by not taking her to a different museum or park or class every day, but I do feel enriched when we’re home together singing the old “Batman” theme while she pumps her arms up and down, Batman in one hand, Joker in the other.

It’s been thought forever that the moon has special powers. I’ve never believed that, but last night proved me wrong.