I’ve felt such a rush of love for Sienna the last few days that I felt it was important to revisit a blog I’d written for the NYC Dads Group about falling in love with your child. The blog was about how much trouble I had loving Sienna during her first 6 months and how I set myself up for failure. I still face that problem in therapy…setting myself up for failure. So this blog re-post is also a reminder that I need to patient when it comes to  therapy. This is a blog for myself, mainly, but also for all those new parents out there who are inundated with insane expectations forced upon them by society. You can find the original post here and I thank the NYC Dads Group for allowing me to share content I’d written for them on my own blog:

Here is what I wrote:

One of the most ubiquitous and most dangerous clichés around is “love at first sight.” In respect to having a child, it’s supposedly that moment when you hold your son or daughter for the first time, when you feel your heart “melt” and you know, truly know, that you’re in love. I use the word “dangerous” for a reason; for someone, such as myself, who suffers from depression and anxiety, the cliché can act as a catalyst for the mind to create an unrealistic anticipation, an engraved in stone expectation. But what happens if that moment doesn’t occur? What happens if you hold your child for the first time and love is the furthest thing from your mind? For me, my anxiety and depression ratcheted up about a zillion percent, and my mind became even more of a brutal enemy than usual. While depression and anxiety can exacerbate just about every aspect of having a baby, perhaps the worst thing it intensified in me was that concept of love or more specifically, the question: When will I fall in love with my child?

When Sienna was born and I held her for the first time, I did feel wonder, but my overwhelming emotion was fear, and my brain kept whispering, actually shouting, that I was going to fail as a dad. Sadly, In no way did I feel love. Instead, I felt guilt. I was guilty because I didn’t fall in love with my daughter the first time I held her. I was guilty because I didn’t instantaneously love this innocent creature my wife and I had created, and as the days went on, I became obsessed with trashing myself for both not adhering to the cliché why and desperately trying to figure out when I’d fall in love with Sienna.
I tried to love my daughter, but it didn’t work. I kept waiting for THE MOMENT, the flash of light, the mental click of a button. I suffered through numerous panic attacks during which I sobbed and curled into a ball while my daughter screamed and pooped and screamed and pooped. I suffered through hatred of both my daughter and myself. My mind was accusatory, a constant torment. I felt like the villains in Superman II as the Kryptonian council pronounced their sentence: “GUILTY!” “GUILTY!!” GUILTY!!!”
Unlike me, my wife did fall in love immediately; well, that’s not quite true, she fell in love while Sienna was still in the womb. I wondered if it’s different for men and women. Is it more difficult for men to fall in love with their children because they lack that 9-month physical bond? Thus I read article after article on the Internet that often confirmed this theory, but still my mania and self-reproach remained and in fact, worsened.
After a few months, my wife went back to work and I became a full-time stay-at-home dad. I still disliked my daughter. At times I wanted her gone – just gone – and my shame increased. How could I take care of this little thing when I didn’t love her? When would I fall in love? When? When? When? I craved that moment. I NEEDED it. I began to ask other dads when they fell in love with their kids thinking their commiseration could help, but instead my strategy backfired. The first time I went to a NYC Dads’ Group meet-up, I remember rolling Sienna through the Central Park Zoo, surveying dads about love and openly admitting that I didn’t love my own daughter. Their answers ranged from instantly to two years. Two years??? How could I live in such pain for two years? At one point, I became so overwhelmed that the tears began to flow and I had to sit on a bench to gather myself. A couple of dads reassured me that it would get better, that it just took time, but being a pessimist, I immediately thought of the extreme of two years. I castigated myself constantly for being a bad father. Each night I went to bed hoping the next day would bring about that expected moment of clarity. Each morning, I drowsily awakened feeling nothing but humiliation and sadness.
Several months passed by. My wife held me in her arms when the mental pressure manifested itself physically in shaking and chest pains. Sometimes my parents took Sienna for the night to give me a break. I talked about her incessantly in therapy and asked WHEN? My therapist told me to stop going there. Just stop my mind whenever I began to question or feel guilty. I stubbornly, rigidly believed such a thing impossible.
Around six months after Sienna was born, we brought her to a Lifespan Development class conducted by one of my former employers and my wife’s former professor at NYU. Sometime during the class, my wife took a picture of Sienna and I interacting. When she showed it to me, I was stunned. As I stared at my facial expressions, the softness in my eyes, the slight smile, I realized I was in love with Sienna and that I must have been for some time.
Further, I finally realized I had set myself up by believing in the clichéd “moment,” the Good Will Hunting breakthrough. As with therapy, there is no sudden burst of lucidity when it comes to falling in love with your child, and by expecting it, you’re only setting yourself up for disaster, guilt, and agony. It’s a different experience for each dad, for each parent, and comparing yourself to others will only end in mental anguish. This is true with most people, but for those with depression and anxiety, it is especially pertinent, for we always go to the extreme and then blame ourselves when it doesn’t come to fruition. So while the clichéd moment might be false, the clichéd “falling” in love just might be true as it implies something continuous and gradual, something that happens without you even realizing it. I carry the picture (see below) my wife captured of Sienna and I with me at all times…not as a reminder that I love my nearly one-year-old daughter (for that I feel it in my gut), but I will always need to remember not to succumb to the minefield inside my mind. Things will happen when they happen, so long as I let them. 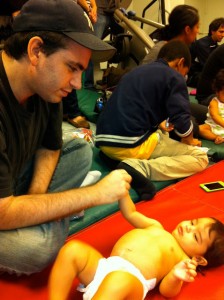