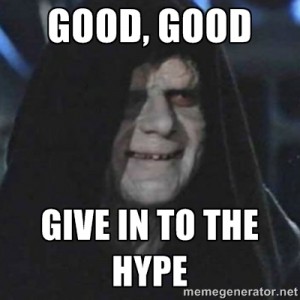 I didn’t plan this. I didn’t plan to be salivating at the mere thought of seeing Star Wars: The Force Awakens. While I’ve always been a big Star Wars fan, I fall into the “Damn you, George Lucas!” category. Lucas let me down. First with the special editions in which he had to add in extra, poorly rendered CGI creatures and have Greedo shoot first and miss at point blank range (which to me altered Han Solo’s entire character arc – he loses some of his depth as an antihero. The “self-defense” thing changes Han from a smuggler willing to simply kill a guy [even if that guy was a bounty hunter], thanks the barkeep, and walks away and eventually transforms into a person willing to put his life on the line for Luke Skywalker and the rebellion). Then Lucas came out with the loathsome prequels that introduced one of the most irritating and racist movie characters ever  (Jar Jar Binks); bored us with trade regulation discussions; screwed up the logic of the original trilogy (Leia remembers her mother how if her mom died during childbirth?); murdered the mystery behind my favorite character, Boba Fett, by showing him as a little kid wanting revenge; eschewed the magic of actual sets, miniatures, puppet and costumed creatures and props for  CGI worlds, CGI characters, CGI overload; shows Anakin Skywalker’s fall – I mean split second change – to the dark side; and, of course, gave us such brilliant dialogue as:

Anakin Skywalker (to Padme): “I don’t like sand. It’s coarse and rough and irritating, and it gets everywhere. Not like here. Here everything’s soft… and smooth…

So yeah, I despised the prequels, but I could get over them if Lucas did one simple thing: release the original cuts on DVD and Blu-Ray. But he’s refused to. He believes it’s his work so he can tinker and destroy as much as he wants which I understand…it is his work, but it also belongs to the world. Steven Spielberg understood this when he re-released E.T. and digitally replaced guns with walkie-talkies. When it came time to release the new version of his classic on DVD, he gave us both versions. But George Lucas is stubborn and too often shows disdain for the fans of the universe he created. And that pulled me away from Star Wars, so when I heard Lucas sold his empire to Disney, I was thrilled because maybe we’d finally get the real original trilogy on Blu-Ray (hasn’t happened yet, but I hold out hope). Still I was antsy about a new film especially one including Han, Luke and Leia. I didn’t want to see an old Han Solo just like I didn’t want to see an old Indiana Jones (and we all know how Indiana Jones and the Kingdom of the Crystal Skull worked out). I learned J.J. Abrams planned to direct, but still I worried until I learned that the new droid, BB-8, was real – not CGI; that they hired The Empire Strikes Back screenwriter, Lawrence Kasdan, to help write the script; that they filmed on location instead of sound stages for the most part and built the iconic Millennium Falcon. The needle moved towards the excitement level.

And then the Disney hype machine won me over with this image:

The hook became deeply embedded within my cheek and the line was pulling hard.

I’d already introduced Sienna to Star Wars, but now I  went into overdrive. I found my old Darth Vader carrying case in my parents’ attic and gave it to her while Elaine’s sister supplied her with Itty-Bitty’s of all the classic characters: 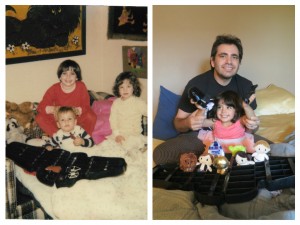 I showed her clips from the original movies and told her I saw Star Wars in the theater when I was 4 and distinctly remember thinking Obi-Wan Kenobi was speaking directly to me when he was trying to get R2-D2 to emerge from the shadows. We got lightsabers and continue to have enormously fun battles. Sienna even wanted to carry a lightsaber with her for Halloween even though she was dressed as Princess Aurora. And all the while the Disney hype machine permeated all of existence. The toys. How I wanted the toys to share with Sienna and to play with myself. I still badly want that $150 Sphero BB-8 that you can control with your phone even though I had no idea if either the character or the movie would be good. I wanted it! Me! 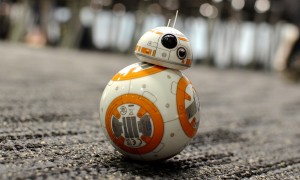 I discovered the “Black Series” which consists of highly detailed figures and vehicles. I wanted the Chewbacca mask that howls and growls like a Wookie when you put it on (and lucky for me, Elaine bought it for me as a Hanukkah present). Yes…the hype’s made me feel like a kid again. I want to play with the toys and I’m so excited to share them with Sienna and show her the original trilogy (I don’t know if I can suffer through the prequels).

Star Wars: The Force Awakens has taken over the Internet and, well, the world. You can’t go 2 commercials without seeing some sort of tie-in and for once, it doesn’t matter to me. Bring on the old Han Solo. Bring on the old Luke Skywalker and Princess (I mean General) Leia. Bring on the struggle between the light and the dark side. Bring on C-3PO and R2-D2. Bring on the Millennium Falcon – you’ve been missed. And welcome to a new diverse universe with a black former stormtrooper, what seems to be a young, female hero, and the much-needed, glass ceiling breaking first female stormtrooper/villain in Captain Phasma played by Game of Thrones’ Gwendoline Christie (speaking of Game of Thrones, now that’s a show that took its cue from the original trilogy – actual sets, locations, costumes, props…those are the things that make a cinematic or televised world feel real.

You’ve won Star Wars: The Force Awakens hype machine, and I don’t mind in the slightest.

Now I just need to wait 31 more hours until we meet universe to face.

3 thoughts on “How The Star Wars: The Force Awakens Hype Machine And Toys Hooked Me”