I held the book in my hands and turned to the table of contents. My name in black and white. Twice. “I’m published!” I thought. “I’m really published!” A little electric jolt awoke my stomach’s butterflies. But lurking beneath the jolt like a cancerous cell was envy and self-flagellation and the irrational side of my brain yelled, “So what? You’re not on The Today Show! You’re not on Good Morning America! This is nothing! You’re nothing! You’ll never reach that pinnacle!” What exactly is that pinnacle? I have no idea. But my depressive brain seems to know or at least claims to. The butterflies fell ill, calcified, settled in my chest and belly like stones.

It didn’t matter that the same day I saw my stories printed in Dads Behaving Dadly: 67 Truths, Tears and Triumphs of Modern Fatherhood (available at Amazon and Barnes & Noble), I debuted on WhatToExpect.com with a paid story about the first time it hit me I was a dad and was listed on Mike Reynolds’ awesome site Puzzlingposts.com as an important dad blogger to read. It still wasn’t good enough because I still haven’t hit Huffington Post or appeared in a commercial or sat next to George Stephanopoulos on a talk show set. 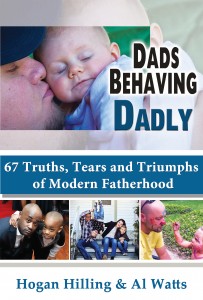 I held my book and despaired and screamed at myself to “STOP!” I pinched myself hard enough to leave a welt.

This is such an important week. For the first time I can recall, fathers are being celebrated across the country in a way they never were before. Dove Men+Care debuted a tearjerker of a commercial showing dads as real, significant, beloved, responsible people:

Today Moms changed its name to Today Parents. My friends and fellow dad bloggers attended the first ever summit on working dads at the White House. Friends and fellow dad bloggers, people who have been so kind and supportive to me, have appeared and will continue to be featured on The Today Show and Good Morning America throughout the week. A great friend nabbed a job writing for Time.com. Friends and fellow dad bloggers took park in huge brand campaigns about the changing views on fatherhood. Andy Hinds wrote about how 2014 is the Year of the Dad. And I’m so happy for them. I’m so proud of them. And I feel so damn envious that I’m NOT them. And coupled with that envy is this corrosive guilt, something my therapist constantly reminds me serves no purpose except as ridiculous self-castigation.

I’ve been blogging for less than a year. In that time I’ve created some sort of presence in the dad blogger community that I don’t understand because I feel my work sucks. I’ve spoken at the 2014 Dad 2.0 Summit. I’ve seen my writing appear on The Good Men Project and at the National At-Home Dad Network. I’ve been on the Life of Dad podcast and the NYC Dads Group podcast. The NYC Dads Group blog has shared my blogs as well as original work for their site. And each time something happens I feel that jolt of pride and joy followed almost immediately by that acidic, destructive jealousy and shame.

My brain, my ludicrous, hateful, powerful brain refuses to let me enjoy these successes and realize that having near 290 Facebook likes just weeks after launching my Raising Sienna FB site and near 270 Twitter followers is enormous, that it took some dad bloggers years to reach those numbers, because I’m too busy comparing myself to those dad bloggers with 95k likes. I’m too busy measuring myself up against the “big boys,” the ones that have sweated and worked for 3, 5, 7, 10 years to reach the levels they’re at. I’m too busy telling myself I’m not good enough because I’m not them.

I become obsessed with symbols, be it getting on a big website or television show or having a former teacher promote my work on her site or be picked to participate in a big campaign. Right now that symbol is getting on Huffington Post. Nothing compares to getting my work on HuffPo. I’m desperate to get on the site and each time I see a friend of mine share one of their HuffPo pieces, I’m so proud of them and so so covetous. I’m also extremely thankful to my fellow dad bloggers for lobbying HuffPo to print my work and because I’m so jealous, I don’t think I’m deserving of their kindness. But regardless, the point is that should I somehow reach the HuffPo level, I’ll feel that similar jolt of excitement and then it will be buried by whatever becomes the next symbol. I’m as yet unable to enjoy the present, the gifts I’ve received, the things I’ve accomplished. That’s what depression can do. That’s how strong and insidious this disease is.

I’m working so hard to get out of this treacherous, sickening mindset. I scream at myself. I physically slap or pinch myself to bring me back to rationality, but so far the irrational side of my brain is as imposing as the 700 foot ice wall from Game of Thrones and seemingly just as punishing to conquer.

But I’m not giving up. I REFUSE to give up. I’ll continue to go to therapy. I’ll continue my regiment of meds. And one day I’ll climb that wall. One day I’ll be able to look back at all the things I’ve done as successes instead of thinking about all of the things I haven’t done. One day I’ll be able to hold my next book and enjoy it for more than a few minutes. I’ll bask in my triumphs for days, weeks, months, years. The present will hold deep meaning. And I’ll no longer covet my friends’ feats thus eliminating that horrible guilt from my life. I’ll virtually jump up and down with them and revel in their accomplishments. One day there will be no despair. Nothing but pride and happiness.

Now I’m off to go sign Dads Behaving Dadly for my parents.

12 thoughts on “Depression Hits During A Father’s Day Week of Success, Envy, Pride and Guilt”