That’s what my near 4-yr-old daughter said as I lay under three blankets, teeth chattering, body involuntarily shaking, but still unable to feel my legs. It had been approximately 45 minutes since I finished digging my car out of three feet of snow thanks to winter storm (aka blizzard) Jonas. I stupidly skipped both breakfast and water in my stubbornness to get the car free. I just put on my coat, hat and gloves, grabbed a shovel and waded my way through giant snow drifts. And then I set to work, back and forearms aching, hands going numb. At times I’d stop to breathe and look at how much left I had to do and wanted to scream obscenities at the snow gods. I continuously wiped sweat from my brow and ignored my throat’s begging for fresh, cool water. I didn’t even think to grab a handful of snow and down it.

Hours later I’d freed the car, but parking was nonexistent. Ideally I could stay in my spot for the next few days but I’d have garnered a pile of those infuriating NYC orange parking tickets, so I took the car out and drove around and around and around looking for somewhere to leave my car. I called my parents who live in the next town over and they suggested I leave the car at their place for a bit and when ready, they’d drive me home if the conditions remained hazardous. Serendipitously, Elaine and Sienna had come down to play in the snow right when I’d finally dug myself out so they were right there when I got the invite. Elaine and Sienna piled into the car and we made our way to my parents’ house, something I barely remember. Actually, I barely recall much after that.

According to Elaine I complained of being dizzy. She’d brought a KIND bar with her because she knew I hadn’t eaten and after getting me out of my winter-wear and leading me to the couch, I chomped down the KIND bar and drank some water, but I still didn’t feel right. I remember the room spinning a bit. I remember my mom and Elaine talking about a sudden drop in blood sugar and the need for orange juice but is was like listening through walls of cotton. I don’t remember drinking it or where my dad or Sienna were playing. Apparently after drinking the juice, my teeth suddenly started chattering ferociously and I got the shakes. I lay down on the couch and they covered me with blankets. Later Elaine said my fingernail beds were blue and that I was showing signs signs of hypothermia. They pulled off my wet jeans and placed warming packs on my feet and shins which felt like blocks of ice. I must have been making pathetic sounds because this is where I recall Sienna saying, “Daddies DON’T cry!!” It sounded far away but it penetrated straight through my spasming, icy body right to my heart.

You see, as someone with depression and anxiety, I’ve cried in front of Sienna before and each time I’ve done my absolute best to explain the sadness, the tears rolling down my face. I’ve explained how there’s a boo-boo in my head causing these emotions. I’ve let her watch me take my many medications. She stays with my mom every Wednesday while I see my therapist. I’ve spent so much time trying to explain my disease and why it makes me melancholy and panicky, causes extreme chest pain and sometimes forces me to bed, and that moms and dads are human, that moms and dads can cry, that that comment’s stuck with me ever since I stupidly walked out the door with a shovel, but no food or water.

Where did she hear that? Did she tell one of her classmates that she saw me cry and the reaction was shock and disdain? Teasing even? Or did someone just come out with it during class?

Daddies DO cry even if they don’t have depression. It’s time we shatter that myth.

That’s why I like Keith Negley’s bold picture book, Tough Guys (Have Feelings Too) so much. It’s a beautifully illustrated children’s book that shows male superheroes, wrestlers, bikers, ninjas in poses showing sadness, fear and other emotions completely in contrast with their “macho” images. 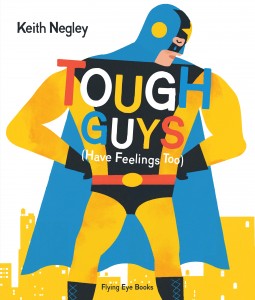 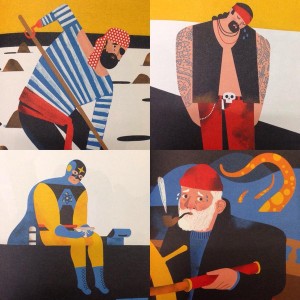 I’m not macho. I don’t outwardly look like any of the figures portrayed in Mr. Negley’s book. The closest I’ve ever come to being “macho” is doing a fairly good imitation of the late, great Randy “Macho Man” Savage. I show fear, frustration and depression along with love, happiness (when I can) and joy (again, when I can). I don’t smile nearly enough and that’s something I need to work on along with all of the other things on which I’m working during therapy. But there’s one thing I do know – all dads (and moms) have emotions. Dads get scared. Dads get sad. Dads fall into the trap of feeling like they’re not living up to the stereotype of being tough enough for their kids. And that’s where the brilliance of Mr. Negley’s final page comes into play: 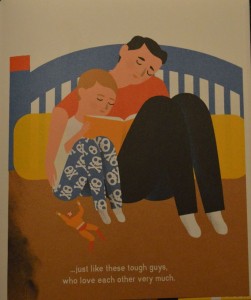 Regardless of exterior ALL dads share the same emotions as their kids. Children need to understand this. It doesn’t matter if you’re a a 6’4″ father covered with tattoos and a huge shaggy beard or an average 5’8″ schlub like me. We all experience strong emotions of sadness, fear and anger. None of us is too tough to shed tears, especially dads with diseases such as depression. But most importantly, all of us dads love our children with an immeasurable devotion.

So to whoever told Sienna that daddies don’t cry and undermined everything I’ve tried to teach her about my disease and feelings, you’re wrong and I think Mr. Negley’s book needs to be part of your nighttime ritual.

Daddies do cry and it doesn’t make us weak or foolish or silly.

It makes us human.