Sometimes the groundhog is unrelenting. Sometimes he refuses to talk Old Man Winter out of releasing us North Easterners from his icy grips despite the turn of the calendar. It snowed on the first day of the spring here in New York, a day usually earmarked for rebirth and the end of winter’s cruelty. But instead 3-5 inches fell from a dull white sky. Still it was a special day for Sienna turned 3 on that snowy first day of spring…and turning age 3 is both magical and full of curveballs.

We held a large party for Sienna’s first birthday at my parents’ house. Few kids attended, but we were surrounded by friends and loved ones who laughed as Sienna painted her confused face with chocolate cake. We didn’t do much of anything for Sienna’s second birthday. I think we went out to dinner to celebrate, but honestly, I cannot recall for “birthday” still meant nothing in Sienna’s mind. But it did this year. I’m sure if she completely grasped what “birthday” means but she knew it was a momentous occasion revolving around her and that was enough.

“You know what’s coming up on Friday,” I asked?

“My birthday!!” Sienna gleefully yelled, emanating so much excitement she probably glowed in the dark.

“And what does a birthday mean?”

“What type of cake do you want?”

“Chocolate!” she said, stretching the word out so I could fully understand her desire. She might as well have drooled, jaw wide open à la Homer Simpson.

“Do you want ice cream cake or regular cake?”

“I guess we’ll have to see what happens,” I said with a wink.

Now, I don’t want my daughter to always associate all of these superficial things with birthdays, but I have no problem with it at age 3 for I felt just as much, if not more, ebullience as Sienna. I’d gone to Toys ‘R Us and picked up a bunch of little things for her to open including some Doc McStuffins and Mickey Mouse stickers, but also Iron Man and Captain America action figures (both Elaine and I want Sienna to inherit our nerdiness) to join her beloved Hulk. On my recommendation, my parents picked up a set of 100 Picasso Tiles (a less expensive, but just as wonderful version of Magna Tiles) that I knew Sienna would love since she enjoys building but isn’t quite ready for little LEGO pieces. We didn’t plan a party – no bouncy houses, no other kids. Elaine and I figured we had one more year to have Sienna all to ourselves before we had to deal with shelling out hundreds of dollars for a noisy, chaotic fête. Instead there’d be cupcakes at school, small presents at home, dinner and a more presents at my parents house and then 2 days later, a small celebration with our extended family. But sometimes a curveball throws off even the best planning.

The morning of Sienna’s birthday was perfect despite the snowy forecast. As with all school days, I woke her up, but this time I grinned widely and said, “Happy birthday sweet Sienna!”

“It’s my birthday!” she said, sleep melting from her eyes quicker than I’ve ever seen.

“That it is! Let’s eat and get dressed and get you to school where you can have cupcakes and everyone will sing ‘Happy Birthday!'”

We arrived at her classroom, cupcakes in hand only to discover the place was near empty. Three or four kids sat playing with toy cars or blocks, but I’d never seen the place so barren.

“Hi birthday girl!” her teacher, Miss Joanne, said placing a purple crown decorated with glitter spelling out “Sienna” and “3” on my daughter’s head. Sienna smiled broadly and fingered the crown.

I gave gave Miss Joanne the cupcakes and learned that 7 of the 12 kids were home sick with the stomach flu. Elaine herself has suffered all week from a similar illness, though we’re not sure if it was a stomach flu or food poisoning. Either way it landed her in the ER because of the pain. But Sienna still had the crown and the cupcakes and enough kids to sing, so that was unfortunate, but ok. 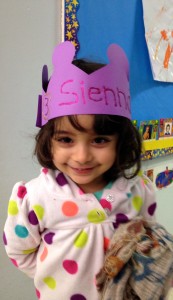 The birthday girl at school wearing her purple crown

The rest of the day went as planned. Sienna came home and opened her little gifts with an intensity that would probably scare off a few people. Seriously, the girl was so into unwrapping each present that I had to keep asking her to smile. But she loved each one, especially Iron Man and Captain America. She ran to get her Hulk figure and had me pretend to be both Iron Man and Cap while she voiced the Hulk. I explained that while Iron Man could fly and the Hulk could jump really high, Captain America’s power was super strength, so she solved that problem by sprinkling him with pixie dust (“Pixie dust away!” for all you “Jake and the Never Land Pirate” fans). We had a great time playing and enjoying ourselves as the afternoon bled into evening. Time to head to my parents. .

We walked outside into a spring world of pure white snow, Sienna happily catching flakes with her tongue.

“Daddy, you have to clean the car, Daddy.”

I cleaned off the car and off we went to my parents’ house for meaning it was time to head to my parents’ house for eggplant parmigana, chocolate cake and of course, more presents. Balloons greeted Sienna as we walked through the door along with grinning grandparents. I think, like Elaine and myself, they shared our enthusiasm Sienna had started to understand the birthday concept.

The Picasso Tiles were an enormous hit as I’d expected. They’re colorful, magnetic and so easy to use. Sienna and Elaine built tower after tower with both fervor and deep concentration only for Sienna to suddenly grab the Hulk, yell, “Hulk smash!” and completely demolish their creations. I couldn’t have been more proud. 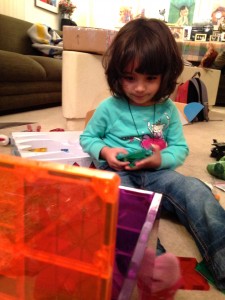 Sienna deeply considering where to place the next Picasso Tile

There is one thing to mention before we get to the cake, the candles and the singing. When I was at the Dad 2.0 Summit in San Francisco less than a month earlier, I’d asked the people working in the Lee Jeans Denim Den, a sponsor booth made to look like an actual Lee store, if they made pants for toddlers. I honestly had no idea because just about all of Sienna’s clothes are hand-me-downs. They told me yes and I didn’t think anything more of it. The next thing I knew I received an e-mail from Lee asking about sizes for not just Sienna, but Elaine as well! Stunned, I responded with the information and asked why they wanted to know.

“It’s your daughter’s 3rd birthday! We want to do something nice for her!” read the e-mail, totally blowing my mind. And so a package came a few days prior to Sienna’s birthday with 2 pairs of jeans each for Sienna and Elaine. While Elaine’s fit just fine, Sienna is such a string bean that I had to pull out the adjustable straps at least 10 times on each side. Still, she looked great! I e-mailed Lee back and thanked them wholeheartedly, mentioning the straps, but saying it was perfectly fine. Once more I thought nothing more of it. 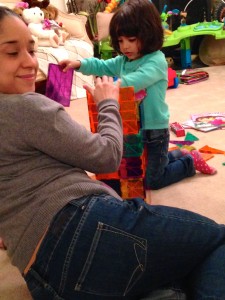 Out came the cake – chocolate as requested – adorned with 3 flickering candles. Sienna stood on a chair not quite knowing what to do with herself, but clearly happy and maybe a little shy and embarrassed as we sang “Happy Birthday” to her. She’d experienced this ritual before (both Elaine and my birthdays were in February). She’d experienced in class, though it probably meant less to her because the few classmates there and her teachers remain mostly strangers. This was her mommy, daddy, grandma and pop-pop singing to her. So she stood there as we sang sometimes looking down at the floor, but mostly staring at us with her eyes as bright and dancing as the candles’ flames and then she blew out the candles, had a small slice of cake and raced back to the Picasso Tiles. All in all, a very successful birthday, but she still had the small party with the relatives to go. 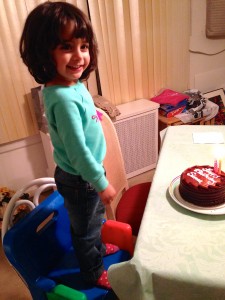 Saturday was a relaxing day. Nothing doing. Sunday arrived and we were all set to travel to New Jersey for Sienna’s party when she started complaining of stomach pains and developed a slight fever. Curveball. Should we cancel at the last minute after all of the preparation my aunt and uncle had done, after my cousins had set aside their busy schedules and roped their children together? The answer came in the form of a spray of vomit. Swing and a miss. Terror seized Sienna as she’d only vomited once before in her life (3 days later she’s well but fears eating anything lest she throw up). Her fever spiked to close to 101. Elaine and Sienna stayed home. I went to my parents to New Jersey, to the balloons and cardboard party glasses and presents and Hello Kitty ice cream cake awaiting the birthday girl. It was an unfortunate turn of events, but when you’re 3, you don’t remember such things and as adults, we were disappointed (my grandmother especially since she’s 95 and yearns to see her great-grandchildren whenever possible), but we barbecued and talked childhood illnesses and sang “Happy Birthday no Sienna!” (as suggested by one of kids) as Elaine texted me with positive updates. 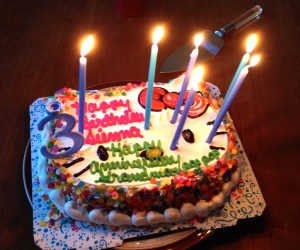 Thus my little girl’s birthday weekend ended on a slightly sour note (very sour if you’re talking what that vomit must have tasted like), but on Monday she noticed 3 more balloons to add the the 3 she already possessed as well as 4 more presents to open and her tummy felt slightly better for a short while. But the biggest surprise (at least for me) came when I opened the door that afternoon and found a large box. Inside was a wrapped gift that Sienna, with her usual intensity, tore open revealing a very sweet card marking the passage into age 3 from Lee Jeans as well as another pair of pants and a really cool Kinetic Sand kit that Sienna’s had a ball playing with! Curveball. Swing and a high fly…and it’s outta here! Who would have thought that a short conversation with a sponsor at Dad 2.0 would have led to this icing on Sienna’s birthday cake? 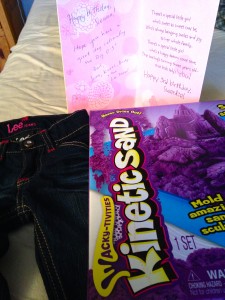 The surprise card, THIRD pair of jeans for Sienna (Elaine received 2 and I, of course, got 1 at Dad 2.0) and Kinetic Sand kit from Lee Jeans

There might have been tummy aches and vomiting and a missed party with the relatives, but the celebration with our core family, the joy in watching my daughter learn, at least partially, the concept of birthdays, and the utter random kindness from a Dad 2.0 sponsor made birthday number 3 one for the ages.