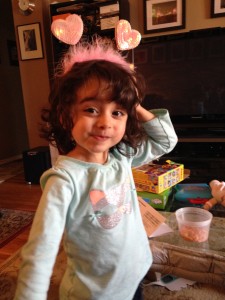 Toddlers may look cute, but en masse, they could end the world

1) Elevator Buttons – All toddlers must press the elevator button. If there are 2 toddlers and you try to negotiate that one press the outside button and the other the inside button, screaming matches may occur because their fingers are almost magnetically drawn to that tiny, little button that wields more power than even a Jedi can master. Considering that a horde of toddlers will race to press the elevator button leading to gloating, crying, screeching and waterfalls of tears, imagine if toddlers had access to the real button!

2) Boxes – Toddlers are like cats when it comes to boxes – they must jump inside and claim their territory. After we took out our little Christmas tree, Sienna wanted to play with the box, but we said no because we didn’t want it to get damaged (and lord knows that most boxes don’t survive after a toddler encounter). A tantrum ensued. Tears. Bawling. Throwing things. “I WANT THE BOX” over and over and over! My wife and I gave her an offer we figured she couldn’t refuse. She could A) play with the box and throw out all of her toys including the precious scarf that rarely leaves her side or B) keep all of her toys and her scarf and just let the box go. Sienna chose A! Wailing, she placed her scooter in the garbage room. She gathered up toys and put them in a basket to throw away. Shockingly, she went so far as to THROW HER BELOVED SCARF DOWN THE GARBAGE CHUTE!! (Luckily I caught it in time and later, when she calmed down, we pretended that I went downstairs and found it before they took it away). Toddlers are stubborn – ridiculously obstinate. Lesson learned…boxes can lead to Earth’s destruction if left up to toddlers. 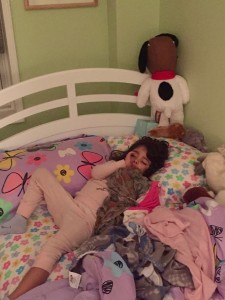 An exhausted Sienna after nearly throwing her scarf away over a box. I don’t know why Snoopy’s in a “Blair Witch” position

3) Toys – Piggybacking on boxes, toys hold that magic power that forces toddlers to fight even if they don’t really want to play with said toy. Billy here might be playing with some truck and suddenly, toddlers descend on him from all directions wanting to play with that same toy even though there are a zillion other fun things with which to play throughout the room. At the toddler stage, the concept of sharing is still often forgotten and the concept of ownership has yet to set in. Regardless, what is so magical about that one toy? They want it. They need it. They must grab it out of Billy’s hands leaving poor Billy in a pool of tears. Then they’ll drop it and go play with something else. One single toy might cause a toddler uprising that we parents will not be able to control. Next thing we know Obama’s been thrown into a bunker as toddler chaos envelops the world because of a red block.

4) Candy – Oh boy. Candy is like an elixir to toddlers. Ears prick up when they hear the opening of a wrapper. Eyes fill with purpose and determination upon viewing a tiny piece of chocolate. Have you ever opened a lollipop only to have twenty toddlers rush you asking, begging, pleading, DEMANDING one as well? I could throw the lollipop on the ground and watch a literal feeding frenzy and those that miss out on the coveted confection would stand up, bruised, battered, bitten, bloodied and turn their devil eyes to you like the kids in Children of the Corn. And the one that did get the lollipop? Now she’s hopped up on sugar! What if they rebel? What if they realize just how much candy is available? We adults would have no chance against toddler swarms in search of candy – that is until they ask us to open it for them.

5) Colors – It doesn’t matter what the object is – clothes, toys, food, cups – if a toddler sees another toddler using something blue, every other toddler in the world will want that same blue object and they’ll fight to get it. They’ll whine. They’ll cry. They’ll try to steal the object out of the initial toddler’s hands. They will not listen to things like, “Your plate is the same blue color as Tommy’s” or “You know, you have this nice purple popsicle…let Norah have the orange one.” Reason doesn’t exist once a toddler has his eyes set on a certain color. They’ll scream and cry until their faces turn blue and ours turn red from frustration and anger. We must be strong against colors. We must be prepared. Because World War III just might break out while we’re still trying to understand why our kids must have that blue plate!

6) Blowing Out Birthday Cake Candles – All toddlers come running when it’s time to blow out the candles on a birthday cake. You can feel their bodies tense as they try to get close enough to extinguish those little flames. They’re like deer…ready to jump at any moment. You know they’d tear each other apart if we didn’t hold them back. Is it their birthday cake? Does it matter? Just look at the picture below. See how they’re all eyeing the candles with such grit and obsession. If we’re not careful with our birthday candles, we could have a full-on battle royale on our hands. 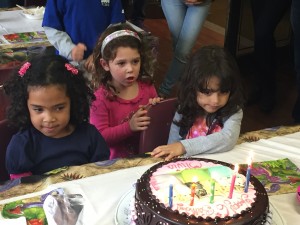 Sienna and others eying candles on a birthday cake.

These are just but 6 things associated with toddlerhood that could lead to Toddlergedon, that could end the world if we’re not careful, patient, logical parents who take the time to explain about sharing, ownership, time and taking turns. We must be strong. We can’t let the tears and whines wear us down. We must be diligent, yet soft in our explanations. Sometimes we must let the actions play out before we can make our moves, but we can’t let the actions spread because there could be a time when every single toddler in the world wants that one orange piece of cloth and once that happens, we’re doomed. It will be…TODDLERGEDDON! 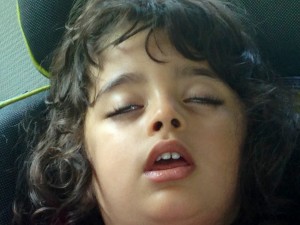 What other ludicrous things do your toddlers covet and fight about? I’d love to hear your stories!

One thought on “6 Things That Could Lead To Toddlergeddon”